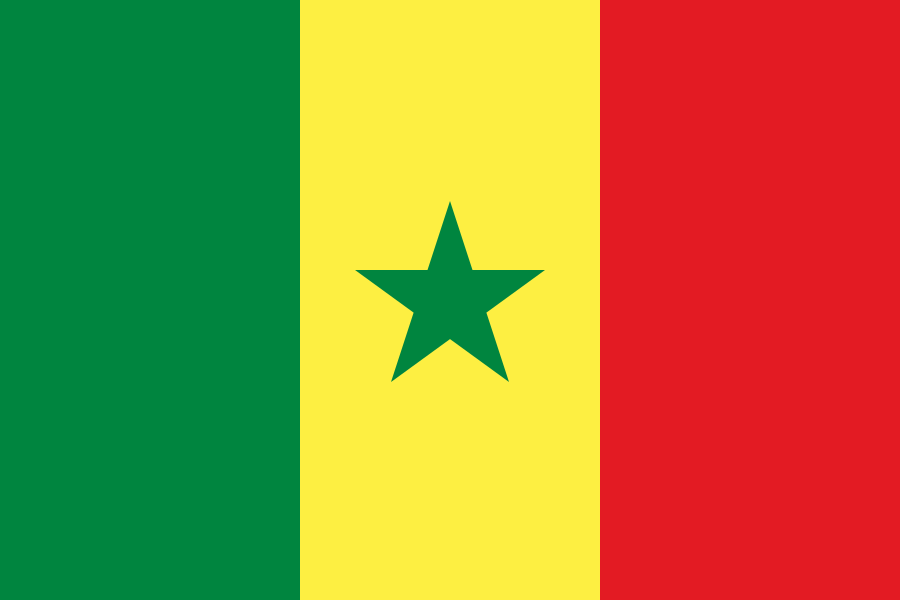 Senegal, bordered by Guinea Bissau, Guinea, Mali and Mauritania, gained its independent from France in 1960.

Dakar is the capital of Senegal and a trading center for the whole of West Africa.

As a former French colony, the official language is French and the national language is Wolof. However, English is widely spoken.

The climate is dry from September to May; Rainy in June, July and August, lightly in Dakar and Northern Senegal including Saint-Louis, sometimes heavily in the South. Temperatures are in the 80’s from May to November, and in the 70’s from December to April.

Islam is practiced by 94% of the population and mosques are numerous. There are a few Catholic churches and one Protestant Church.

DAKAR: Dakar’s IFAN Museum on Place de Soweto houses a superb collection of masks, statues, musical instruments, stools and agricultural implements from all over West Africa. The handsome white Palais Présidentiel, five short blocks south of the Place, dates from 1906 and is surrounded by sumptuous gardens.

Dakar has two major markets. Marché Kermel, east of the Place towards the port, burnt down in 1993, so now the stalls are out in the surrounding streets, selling mainly fruit, clothing, fabrics and souvenirs. The larger Marché Sandaga has more fruit and fewer souvenirs, but for visitors the sheer choice of fabric is a real draw. Dakar also has some of the best Internet facilities in the region, including a 24-hour Internet cafe.

Out of the city center is the Grande Mosquée, built in 1964, with its landmark minaret that’s floodlit at night. The mosque is closed to non-Muslims, but it is worth coming here anyway to see the medina surrounding it. While not picturesque, its bustling atmosphere contrasts sharply with the sophisticated high-rise city center.

THIES: Just 70 km (40 mi) east of Dakar, this is officially Senegal’s second-largest city. Thiès’ main attraction is its world-famous co-operative-run tapestry factory, the Manufactures Sénégalaises des Arts Décoratifs. The tapestries are all based on the paintings of Senegalese artists and can range into the thousands of US dollars.

ST-LOUIS: St-Louis maintains its colonial decor, being the first French settlement in Africa, dating from 1659. Today, the city straddles the mainland, an island and part of the Langue de Barbarie peninsula at the mouth of the Senegal River. You reach the island on the 500 m (1640 ft) Pont Faidherbe, originally built to cross the Danube but shipped here in 1897. Two smaller bridges link the island to the peninsula.

ZIGUINCHOR: It is one of the most inexpensive cities in Senegal. South of Ziguinchor is the Ferme Animalière de Djibelor, which has an interesting selection of tropical plants and ‘wild’ animals, the larger ones in cages.

CAP SKIRING: Cap Skiring has some of the finest beaches in all Africa.

KAOLACK: Kaolack’s main attractions are its beautiful large mosque, decorated in the Moroccan style, and covered market – the second largest in Africa after Marrakesh – with Sudanese-style arches and arcades.

Senegal is located on the most western part of Africa and is the size of South Dakota (75,750 square miles.) It is bordered by the Atlantic Ocean in the west, along 350 miles of beautiful sandy beaches. Senegal is located less than 6 1/2 hours from New York. Click here to see a map of Senegal.

The CFA (African Financial Community) Franc is the currency in Senegal. The official rate of exchange fluctuates daily, $1 = approximately 690 FCFA. For actual conversion rates, visit Oanda.com and perform a conversion for ‘CFA Franc.’

Passport and visa are required. A yellow fever vaccination certificate is required also.